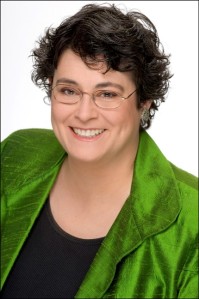 I first met Donna Andrews when we served on the national board of Mystery Writers of America together. I was a regional president, which made me an automatic member of the national board. She was the board’s Executive Vice President, an often-thankless job that entails an immense amount of work and responsibility. Donna served multiple terms, which should tell you something about her dedication to the mystery writing community.

It will come as no surprise that a woman whose books bear titles like The Lord of the Wings, Terns of Endearment, and Revenge of  the Wrought Iron Flamingos would have a clever turn of phrase and a sassy sense of humor. She’s also a “self-confessed nerd” whose childhood favorites were fantasy and science fiction. Her love of mysteries developed during her college years.

She also has a yen for adventure. On her website, she shares stories of her caving exploits, her derring-do at an indoor rock climbing gym, and her adventures at PI school. That’s right. Although she has no plans to give up writing for the life of a gumshoe, Donna is a registered private investigator in the state of Virginia.

Donna has written 31 novels. Four feature a sentient, sleuthing AI named Turing Hopper. Titles like Click Here for Murder and Delete All Suspects evoke a chuckle, and the books are chock full of Donna’s signature humor, but underlying the humor, the question of what it truly means to be human gives the series an unexpected poignance. 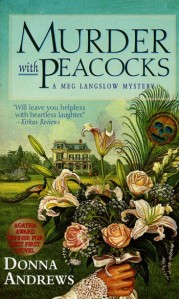 Her best-known series features blacksmith Meg Langslow, who plies her trade in a variety of settings throughout the series. Like her creator, Meg was born in Yorktown, Virginia, where the series begins with Murder with Peacocks. That book won the Agatha, Anthony, Barry, and Romantic Times awards for best first novel and the Lefty award for the funniest mystery of 1999. It features three different weddings, and Meg, young and single, is expected to serve as a bridesmaid in all three. No easy feat when the brides’ expectations include live peacocks, Native American herb ceremonies, and re-decorating one bride’s house. Hilarity–and, of course, murder–ensue. 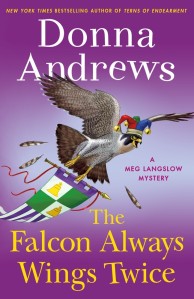 Since then, the series has won virtually every major award in the crime genre (most more than once) and made Donna a USA Today bestselling author.

In The Falcon Always Wings Twice, Meg’s latest escapade takes place at the Renaissance Faire owned by her grandmother. It begins with a delightful piece of what can only be foreshadowing, and if you’d like to hear a little of it, check out the August 7th Friday Feature on my author page. I have a weakness for RenFaire stories (my husband and I were in the SCA in college, and my latest book is set at a Renaissance Faire), so this one holds a special appeal for me. Though it’s #27 in the series (27!), it stands alone. Donna weaves in enough groundwork that her novels can be read in any order.

Want to learn more about Donna and her books? Check her her website, or visit her on the Femmes Fatales group blog. You ‘ll be glad you did.