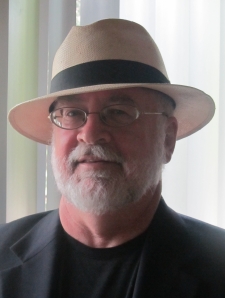 Today’s spotlight is on Bruce DeSilva, the author of the hard-boiled Liam Mulligan crime novels.

His first novel, Rogue Island, won the Edgar and Macavity awards and was a finalist for the Anthony, Barry, and Shamus awards. The second, Cliff Walk, was recently published to rave pre-publication notices including starred reviews in Publishers Weekly and Booklist.

It’s an enviable beginning, but Bruce has paid his dues. Before launching his career as a novelist, he worked as a journalist for 40 years, most recently as a senior editor and writing coach for The Associated Press. Stories he edited won virtually every major journalism prize including The Polk (twice), The Livingston (twice), and the ASNE. He also edited two Pulitzer finalists and helped edit a Pulitzer winner.

He reviews books for the AP and is a master’s thesis adviser at the Columbia University Graduate School of Journalism. His years of experience give his novels a polish and crispness that make them stand out from the crowd. Cliff Walk picks up not long after Rogue Island leaves off, but the books stand alone. 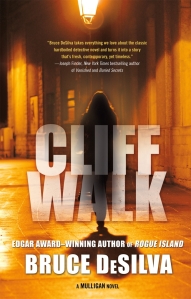 Want an appetizer? Here’s a brief description of Cliff Walk, followed by a link to the opening chapters:

Prostitution has been legal in Rhode Island for more than a decade, and Liam Mulligan, an old-school investigative reporter at the dying Providence newspaper, suspects the governor has been taking payoffs to keep it that way. But this isn’t the only story making headlines. A child’s severed arm is discovered in a pile of garbage at a pig farm. Then the body of an internet pornographer is found sprawled on the rocks at the base of Newport’s famous Cliff Walk. At first, the killings seem random, but as Mulligan keeps digging into the state’s thriving sex business, strange connections emerge. Promised free sex with hookers if he minds his own business — and a beating if he doesn’t — Mulligan enlists Thanks-Dad, the newspaper publisher’s son, and Attila the Nun, the state’s colorful attorney general, in his quest for the truth. What Mulligan learns will lead him to question his beliefs about sexual morality, shake his tenuous religions faith, and leave him wondering who his friends are. “Cliff Walk” is at once a hard-boiled mystery and an exploration of sex and religion in the age of pornography.

You can read a sample chapter here.  Or to learn more about Bruce and his other books, check his website and his blog.