According to his w

ebsite bio, Chris Knopf has been “writing himself out of trouble since he talked a teacher into accepting a short story in lieu of an essay, and an essay in lieu of a multiple choice exam.” Even then, he must have had an old-school charm, which shines through in his public appearances and on the pages of his mysteries, which remind me of two of his favorites–Dashiell Hammett and Raymond Chandler. Knopf has three mystery series now: the Sam Acquillo series, featuring a crusty detective who loves to sail and has a personable mutt named Eddie; the Jackie Swaitkowski series, a spinoff of the Sam Acquillo series featuring Sam’s quirky, outside-the-box attorney; and the Arthur Cathcart series, featuring a market researcher who, after his wife’s murder and his own near-fatal head wound (in fact, he’s believed to be dead) leaves him living off the grid and grappling to recover his old skills and memories from his badly injured brain.

Chris is remarkably versatile. Each of these characters has a unique and authentic voice. Swaitkowski is believably female, Cathcart believably wounded. Sam is an experienced sailor, and Chris portrays the sailing life so authentically that even this landlubber can appreciate and understand it. Like Sam Acquillo, he’s a dog-loving sailor himself, sailing the Little Peconic Bay in Southampton, NY.

Asked about the most memorable thing that’s ever happened to him, he said, “When I was in graduate school in London, I was recruited to help one of my professors publish a book of poetry written by poets imprisoned in the Soviet Union.  The work had been smuggled out of the country by a group of other writers and publishers, though a chain of custody that began with a Nobel Prize winner.  During this effort, we had one of the principal conspirators hiding in our flat, and were warned that foreign intelligence agents might be watching. I wrote a thriller inspired by this, which didn’t go anywhere, but it helped connect me with the agent who eventually placed my first book.”

He was kind enough to answer a few more questions for this blog. So, thanks, Chris–and welcome to a Killer Conversation.

Let’s start with your latest release. What was the inspiration for your new book 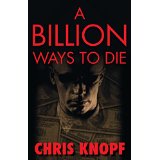 The underlying inspiration was promising that I’d make this series at least a trilogy.  The first book, Dead Anyway, was intended to be a standalone.  Then we thought maybe there could be a second (Cries of the Lost), and now here were are with A Billion Ways to Die.

Can you tell us a little about it?

Arthur Cathcart and Natsumi Fitzgerald, his girlfriend/partner in crime, have been hanging out on a sailboat in the Caribbean, assuming they’re still safely off the grid and below the radar of the various gangsters, terrorists and government officials who could be chasing them.  Unfortunately, this was a false sense of security, proven by the midnight arrival of guys in combat gear and night vision.  It goes downhill from there.

At its heart, it’s an international thriller with a focus on cybercrime, greed and corruption, and the legal netherworld  caused by ambiguous rules of engagement by governments and private interests alike.

What was the most challenging thing about writing it?

Arthur and Natsumi have a very complicated challenge – avoid the notice of law enforcement, maintain false identities, chase down and defeat the bad guys, through means both physical and virtual, since that’s the world we now live in.  None of that stuff is easy to do, and thus, very difficult to write.

Especially if you want to be reasonably accurate and true to the possible with all the technology   Without losing non-technical readers.

What do you hope readers will take away from it?

I just hope they like the story, and maybe gain an appreciation for how much the digital revolution has changed the world, in particular, the world of crime and punishment.

Any words of wisdom for aspiring writers?

That first book was published when I was 53 years old, and now I have twelve in print.  The best advice, I believe, is to keep writing, never give up and never get discouraged.

What do you wish someone would ask you about, but which no one ever has?

One of my books riffs on the basic structure of western aesthetic tradition and is full of literary references, puns and jokes.  No one got any of it.  Though they did like the mystery, so what the heck.

Which book was this? I bet a bunch of people are going to want to go back and read it now to see what they missed!

I’m off to buy a copy. Thanks for the interview, Chris!

Want to read more about Chris and his books? Check out his website, his Amazon author page, and this interview on AbeBooks.Com.

Read any of Chris’s books? I’d love to hear your thoughts in the comments. (No spoilers, please.)

2 thoughts on “Chris Knopf: A Writer for All Seasons”